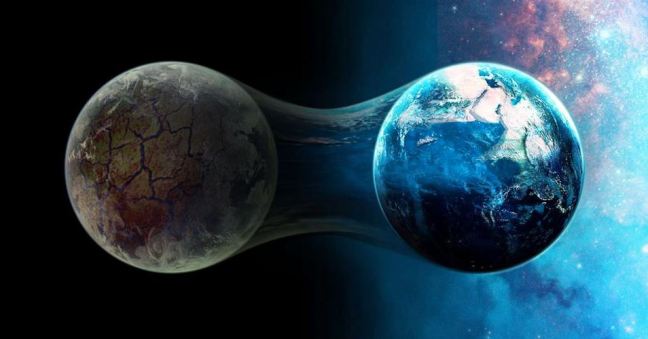 Sustainability (3BL), extrasensory perceptions (ESP), the UFO Phenomena… Could all of this be interpreted as small tips of the same iceberg emerging in this XXI century? This iceberg is the “New Earth” and this text continues the dialog about the features of this future society we see surfacing.

“Shadow and light, darkness and brightness. This coupled reality forms the interior of the human being, which foolishly tries to negate itself daily. Most people want to come across as being a sole expression of light. They refute any identification with the shadow that still is indeed innate to them. Religious figures in particular talk about a dark power, demoniac, inferior, as if darkness was something external, despicable, repulsive, and execrable. Until when will we ignore our intimate reality? Until when will we postpone knowing our internal world? There have been countless attempts to make men on Earth aware that the so-called external darkness is simply the reflection of its own internal realm. (Adapted message from the spirit Ângelo Inácio, psychographed by the medium Robson Pinheiro in Belo Horizonte, Brazil on July of 2006.)

Many are the signs that Earth as a multi-dimensional planetary system is indeed passing through a major breakthrough. However, although the more mystically-oriented individuals may disagree, we see that a bright future won’t be achieved through patient inertia. In fact, the path to this glaring heaven is more likely to be marked by sweat and multiple overcomings, both at personal and collective levels. It doesn’t really matter what lenses we use to analyze our recent history, the result is always the same: old models are in crisis and new models are emerging. This is true for politics, economy, management, education, various forms of social organization, science, religion, etc. This also means the topic we are covering is beyond complex and that here we will barely scratch the surface.

Let’s start with the bright side… In the “Old Earth”, if we can use this term even while still living under its influence, non-physical dimensions were associated with the “reign of the dead” and mostly inaccessible to the living. Contact with this alternative reality could only be achieved through mediums and the contact highly based on faith in the phenomena. While the “New Earth” emerges, however, we are building the understanding that our consciousness is expressed in multiple dimensions. The cosmos, or nature, isn’t reduced to the physical reality we perceive with physical senses, but something much bigger and that constitutes life itself – in a larger perspective than physical life, naturally. All dimensions resonate and influence each other and we express ourselves (as individual consciousness) in those multiple dimensions on a permanent basis. The meaning of “we are one” or “we are connected” is not that we are parts of a whole (a.k.a. pantheism), but that we are “wholes” interconnected by fields (energy fields, consciousness fields, etc.) and influencing each other in a joint march for progress. Think about this as multiple lightbulbs shining in close proximity. Although each lightbulb produces its own light, the resulting luminosity is the result of their collective work.

What we described above may be the emergence of the “Homo Spiritualis” (so to speak) that, unlike the predecessor species, starts to dominate higher human faculties (as opposed to animal ones). The “Old Earth” was characterized by the physical, the material, and lower passions. The “New Earth” is characterized by inter-dimensionality, the certainty of our spiritual nature and expression as such in multiple dimensions of life. Greater maturity as consciousness assures the prevalence of Freedom, Autonomy &Ethics; a topic we will discuss in greater detail in a later text. Here, it suffices to say that in the “New Earth”, the “reign of the dead” is also the “reign of the living” and vice-versa! The barrier between physical and non-physical dimensions is already being mined and brought down, piece by piece and through multiple fronts, including multiple disciplines of formal scientific fields.

This brings us to a related topic, which is the popularization of extrasensory perceptions (ESP). We live today a relative pandemic of such faculties in different degrees. Never before the interest in such faculties was so great, although the topic continues to be treated as a taboo. The interest in similar phenomena, such as out of body experiences (OBE), in a similar way, has also increased and although statistics on this topic is difficult to find (if it even exists), it is reasonable to assume that more individuals are experiencing such phenomena in a natural way (not near death or drug induced), such as through astral projection, than ever before. The term “astral projection” itself was hardly ever used 50 years ago and the phenomena most likely considered as delusion. This was indeed what Robert Monroe experienced while having astral projections regularly during his sleep and not having literature or professionals that could explain what was going on with him.  Now, and this is a very important point we’d like to make, could we speculate that the emergence of those “spiritual faculties” (ESP, OBE, mediumship, etc.) has everything to do with the emergence of a new humanity, the humanity of the “New Earth”? If not, why not?

Now let’s move on to another trend that we believe has everything to do with the emergence of a collective understanding of consciousness and life as existing and interacting through multiple dimensions: the relationship between science and spirituality. As noted in earlier texts (see texts After all, what does it mean to be a “Spiritualist”? and After all, what does it mean to be a “Scientist”?), we see this relationship moving away from a state of mutual prejudice and dogmatism to a state characterized by integrative collaboration. Spiritual evidence is researched and tested in laboratories while reason and ethics substitutes blind faith. Breaking the paradigm that there is separation between the “reign of the dead” and the speculative “reign of the living” is taking us from a state of Science vs. Spirituality to a state of Science + Spirituality as attest the work of Allan Kardec, William Crooks, Sérgio Felipe de Oliveira, Rupert Sheldrake, Dean Radin, Gary Schwatz, Jim B. Tucker, Barbara Brennan and so many others.  The question we leave for you at this point is simply: what of those two relationship types do you think is more mature, Science vs. Spirituality or Science + Spirituality?

So, we talk about our shiny future, but not everything is brilliant yet. There are pressing reforms we need to urgently implement on the way we treat each other and the ecosystems surrounding us. We’re not simply talking about the end of hunger, or social justice. It is imperative we learn to knit the very fabric of our society in sustainable terms. In a broad sense, we are still a collection of near-slaves working to the development of an economy and society that bases its value in capital and goods, in other words, consumption power. It is more than likely that we will painfully learn that “Natural Capital” is far more valuable than “Financial Capital” or “Manufactured Capital” – which, by the way, inherently depend not only on “Natural Capital” but also “Human Capital”. What is the price of nature’s ability to purify the air and water that we depend for subsistence? What financial or manufactured system could replace this? What technology (and at what cost) can offer protection from the Sun’s harmful ultraviolet waves if not the ozone layer? As cleverly noted by Paul Hawken et al.:

“What might be called ‘industrial capitalism’ does not conform to its own accounting principles. It liquidates its capital and calls it income. It neglects to assign any value to the largest stocks of capital it employs – the natural resources and living systems, as well as the social and cultural systems that are the basis of human capital.( Paul Hawken et al., Natural Capitalism: Creating the Next Industrial Revolution)”

We got it all upside down! The economy depends on people and is contained within the scope of human exchange; people, on its turn, rely on a healthy natural environment to thrive. This means that the economy exists within a society which exists within the boundaries of Earth’s nature; yet, we act as if it was the other way around:  Economy first, then Society and if possible Nature! Unfortunately, there is something called carrying capacity and we have already surpassed it, basically guaranteeing severe lessons on the preservation natural resources. Earth itself will help us get this equation straight! We, however, should not just wait, but do whatever is possible to operate under more sustainable paradigms. After all, what is the cost of delays in changing our priorities?  Again, it is important we understand that the so-called external darkness is simply the reflection of its own internal shadow. Only a rudimentary and immoral society yields the issues we see, from hunger to terrorism, from corruption to depletion of natural ecosystems. Changing the external reality pass though self-actualization at the individual and collective levels.

So, to conclude, we now touch on a highly inspiring and exciting idea. As presented in this text, the emergence of mass spirituality suggests that the faculties of the spirit, also somehow being developed in larger scale, will be regularly exercised in the “New Earth”. Now, as observed in multiple cases of interactions with intelligences supposed to be of extraterrestrial nature, this factor is likely to allow a more ostensible relationship with such beings. Just like someone in Japan could hardly communicate with someone in Brazil before the invention of the telephone and the internet, the development of parapsychological faculties should mark a time when we will controversially understand that we are not alone in the cosmos, but constitute a small “household” of a much larger human community. Of course, this is merely speculative. The question then is, could it be true? And if so, what would it change?